A few months ago the Anvil Rooms ran their New York Restaurant Week promotion, it was so good we went twice within a few days so I was very happy to hear it was running again from July 21st – August 15th. We reserved a table for 1pm and when we arrived it was very quiet, we had a table next to the window with a fantastic view of the corniche. I really like the design of the restaurant, the industrial steel theme, heavy red leather chairs and dark wood its all feels very New York and the service is always very good.

For starters I opted for beetroot with goats cheese which was packed with flavour, the various beetroot had retained their bite and combined beautifully with the very creamy goats cheese, sometimes the portion sizes seem small but this was perfect. Greg had the chicken terrine with sour dough bread – the terrine was very coarse and the chicken was so soft and flavoursome with a slight aniseed aftertaste. The vegetables on top were crunchy and it was very well presented it was really nice but he said he wished there was another slice of sour dough but to be fair we did still have the bread basket which is one of the best in the city

For my main I chose barbeque kingfish as I am trying to eat more fish and I had never tried it before – I am so glad I did. I was told the chef recommended it be cooked medium so I took this advice, the fish had been cooked perfectly and had a crispy skin but was so meaty and flavoursome I didn’t want to stop eating it which is the sign of a good meal. The cubes of orange and thick citrus dressing complimented the fish really well though I couldn’t taste any coriander. Greg had slow cooked beef cheek which he loves and had been looking forward to and was not disappointed. The meat was so tender it just fell apart, it was perfect even the small amount of fat was delicious! We were given three small pots of sides to share – salad, fries and spinach which was ample. 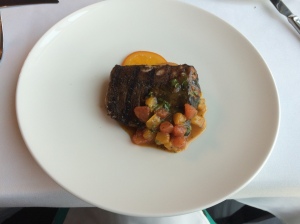 For dessert I had cheesecake which is my favourite dessert so there were high expectations, to be honest I was a bit disappointed as I found the base was quite heavy and soggy, it didn’t really have any taste and the cheese filling was just ok. The strawberries and jelly with it were sharp and added much needed taste to the dish. Greg has s’mores sundae which again he found a bit disappointing. The marshmallow had been wrapped around the ice cream and there were a sprinkling of crackers scattered around it with the chocolate sauce poured on top. He found it all a bit too rich and to be fair what he got looks very different to the images of the dish on the restaurants website so maybe they have changed it slightly. When we go back we would probably choose different desserts as the desserts we had last time ( notably the millionaire sundae) were fantastic.

I really recommend going to the Anvil Rooms especially during Restaurant Week. The food is excellent quality and added to fantastic service and lovely surroundings it makes for a special meal. For 3 courses at lunch is it 91QR and for dinner 138QR which is great value. We paid 285 QR( incl tip) for 3 courses each, a bottle of water and a cucumber lemonade.Although the full menu was available we chose from the Restaurant Week menu.