Some people may scoff at the fact I’ve never been to a teppanyaki restaurant before the same way that I scoff at those people who’ve never eaten a Parmo, a gastronomic delicacy of the small seaside town in which I was brought up. So, when on a recent trip to Dubai I was invited to dine at Benihana I jumped at the chance. We were asked to arrive at 7pm for ‘dinner and a show’ and didn’t have any idea what to expect! We were warmly greeted and shown to the lovely outside dining area where we ordered drinks and perused the menu.

Benihana started out as a small New York restaurant in the 1960’s and is now a worldwide franchise with 2 outlets in Dubai both at Rotana properties. At the Amwaj Rotana there are 3 teppanyaki tables –  each one seating 9 people – a large indoor dining area and a lovely outdoor terrace. We were told we’d be dining with a family of 4 and so once we’d ordered we were shown inside. 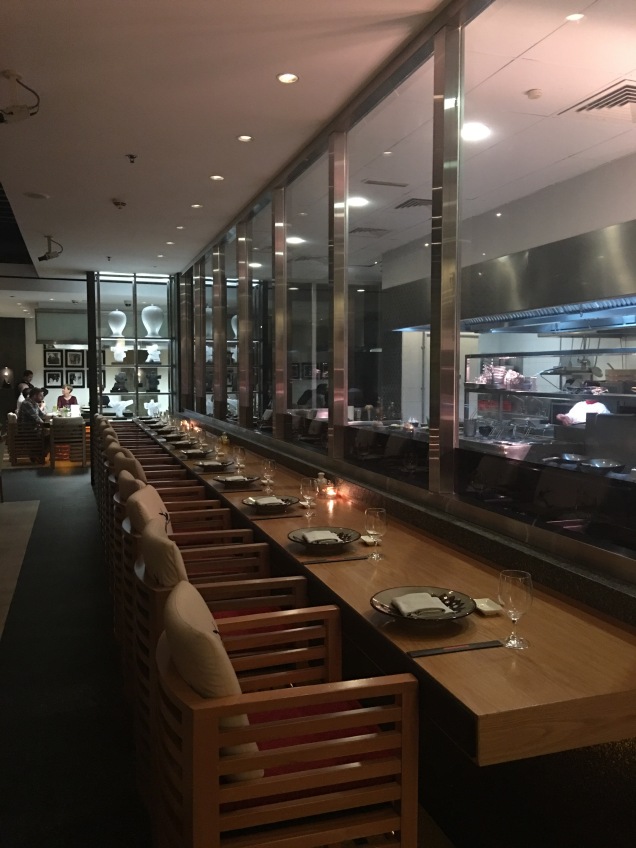 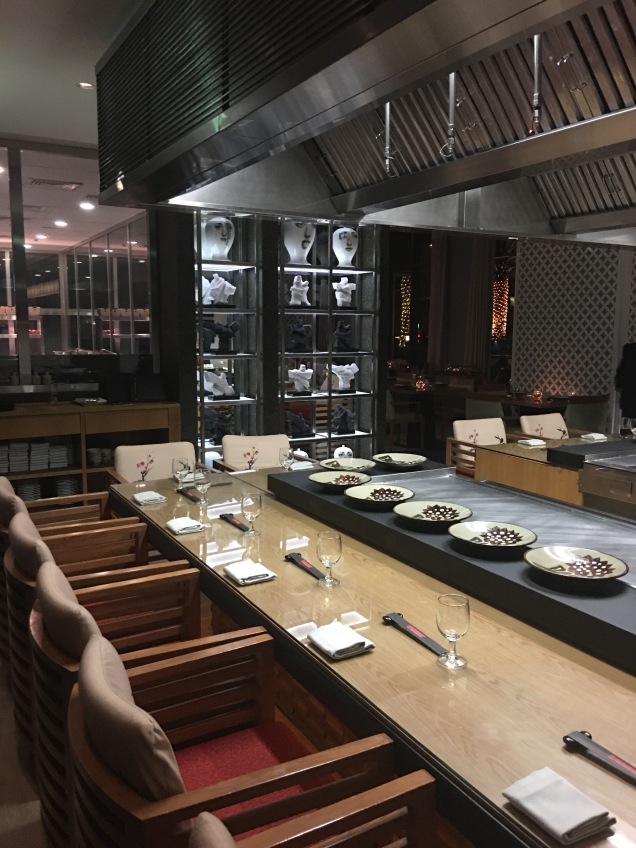 I opted for the Benihana Special (beef tenderloin and lobster) Greg chose the Benihana Combination ( beef sirloin, chicken and shrimp) and once we were all seated we were brought our miso soup. The staff were fantastic and didn’t even bat an eyelid when I dropped my iPhone into my soup sending it flying and creating a mess, I was simply offered a fresh bowl! The soup was lovely – with a good balance of tofu and seaweed, a light, tasty way to start our meal. 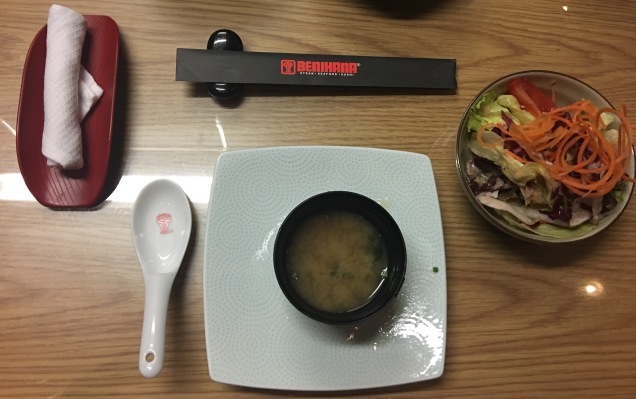 Next we heard a few ‘wows’ and we saw our appetiser heading towards us. The presentation of the Alaskan crab was as stunning as its delicate taste which, along with a selection of sauces and dips, was an absolute winner. While we were tucking into our appetizers our fellow diners were also eating theirs, it was very well timed and organized by the staff.

Then Chef Fernando burst onto the scene – the show was about the begin….

Then the teppanyaki station was lit, we all stepped back a little at this point!

Chef checked on allergies and it transpired that one person was allergic to shellfish so it was agreed the shrimp and lobster would all be cooked at the end which was fine with us. Throughout the show Chef chatted to us, made jokes, interacted with other staff and answered my many questions about the food! I get the impression that the banter is matched to the diners so in an adult only group it may be a bit more risqué! The first course of vegetables were crunchy with a wonderful garlic butter. The fried rice started with Chef recreating a diners face using only an egg!

We then gave our preferences for how we’d like our steak cooked with mine being cooked last as I prefer medium rare. The steak was mouth wateringingly good with a hint of salt and pepper, soy and garlic – it just melted in your mouth. The chicken, shrimp and lobster were equally good and the portion sizes were more than adequate.

By now we were full and the show was over but not the meal as we were shown outside and presented with a wonderful bento box of desserts. Consisting of banana and chocolate spring rolls, chocolate cake filled with yuzu creme, fried ice cream, Japanese  mochi and fresh fruit we had a pretty good go at finishing it all! 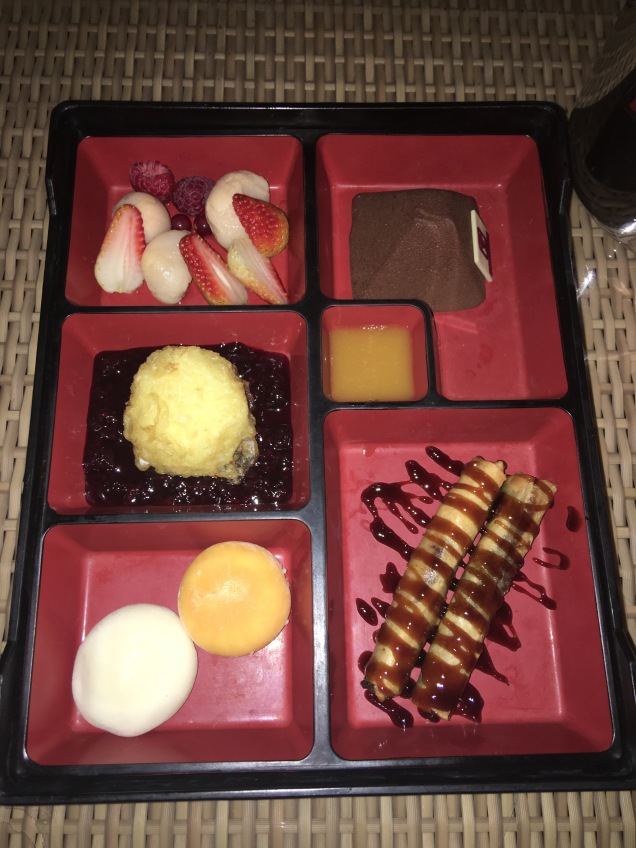 I know that some people may be skeptical of such a glowing review as I was a guest of Benihana but we genuinely had a great time. While we were there all the teppanyaki tables were full and I could see everyone was having fun and their service and food replicated ours, in fact the family who shared our table said they were regulars. I would really recommend Benihana for groups of families and friends of all ages and for couples. I think this concept would work so well in Qatar too, if Benihana did open in Doha I’d definitely be reserving a table!

To reserve a table and check current promotions 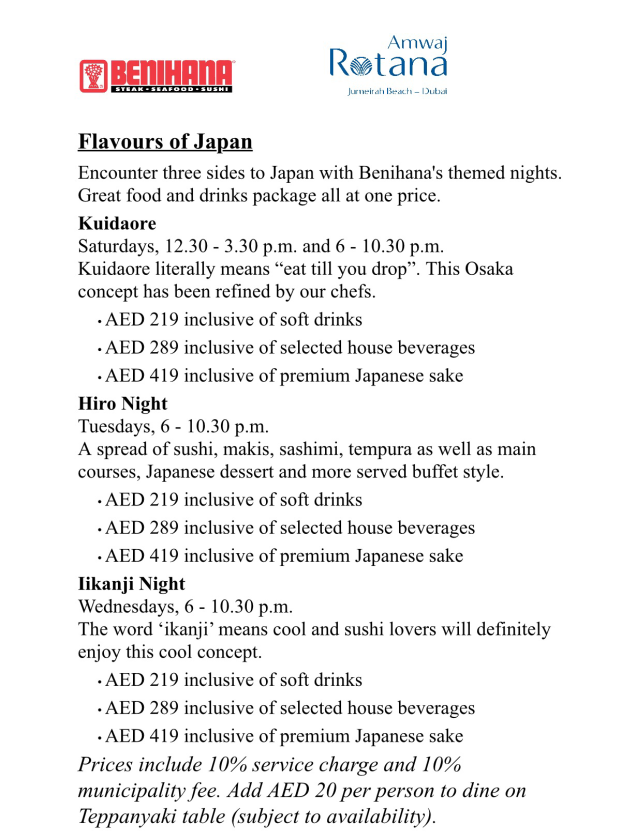 To check out the menu

The food in Vietnam was so good, I love how many herbs and fresh ingredients are used in seemingly simple dishes. This green mango salad with prawns was so zingy, we went back and ordered it a few times! . . . #vietnam #hoian #vietnamesefood #vietnamesecuisine #salad #greenmango #hoianrestaurant #morninggloryhoian #herbs #instafood #whatsonmyplate #freshingredients #zingy #lonelyplanet #tripadvisor #visitvietnam #goodfood
We have been quite picky about restaurants since we got back to China, hygiene and safety has been a priority when choosing where to eat. On Sunday we decided to go back to @fsshenzhen for brunch firstly because the food and service is really good but also to see what measures they have in place. As usual we had temperature checks and QR code’s to scan on arrival and in the restaurant there was plenty of space between tables. All the food was covered and guests were required to wear a mask when at the buffet. As usual at this brunch there was an excellent choice of seafood, meats, salads and desserts plus oysters, carved meats and a ‘chefs special’ served to our table. If you’re looking for a great weekend brunch this is the place - check out their WeChat account for some excellent saving! . . . #shenzhen #futian #shenzhenrestaurants #shenzheneat #sundaybrunch #fourseasons #fourseasonshotels #oysters #seafood #instafood #whatsonmyplate #buffet #lifeafterlockdown #chefsspecial
It’s looking increasingly likely we won’t be going very far this summer. We had planned to travel around China but it seems there are restrictions on foreigners in some areas, plus we don’t want to be stuck too far from home. One things for sure we’ll definitely be going back to Guilin and Yangshuo if we can. The Reed Flute Caves were incredible, well worth a visit if you’re in Guilin. . . . #china #guilin #yangshuo #visitchina #chinatrips #chinadestinations #reedflutecaves #caves #stayhome #exploremore #summerholidays #teachertravels #expatteacherchina #instatravel #tripadvisorchina #lonelyplanetchina #instatravel #localtravel