I felt a bit deflated after today’s experience at La Varenne on the 28th floor of Tornado Tower. Several people have recommended it to us and as we wanted to go somewhere special for lunch we decided to give it a go. I made a booking via their website and received a quick confirmation, we arrived to see a fairly empty restaurant at 1pm. Perhaps one of the most striking things about the restaurant is the view along the corniche and beyond, the design of the restaurant is very good as its flooded with natural light and feels spacious and airy. We booked hoping to have a business lunch but it was not available so we ate off the main menu which isn’t extensive but offers a good selection.

To start we both ordered French Onion soup, when it arrived it wasn’t particularly hot but the strangest thing was that the cheese had clearly been grated into a huge ball and placed on top, not melted on top of the croutons which meant you needed to eat a mouthful of stringy half melted cheese before getting to the soup which wasn’t pleasant. The croutons were in a soggy pile at the bottom of the soup, it wasn’t very well presented as you can see from the photograph and was a bit tasteless and disappointing.

For my main I ordered duck with peppercorn sauce and requested it pink. Unfortunately when it arrived it wasn’t sliced and was very tought to cut into with a reguar knife, it was also nowhere near pink. in fact it was overcooked. The peppercorn sauce was tasty as were the fondant potatoes and the sliced grapefruit brought a bit of zing to an otherwise uninspiring main course. Husband ordered Hammour with crushed potatoes, the fish was moist and flaky and the dish was a success.

Overall we found the food to be pretty average, the drinks were very watered down and the service just adequate. We paid 400QR excluding tip for 2 starters, 2 mains, 1 side and 2 soft drinks. It wasn’t great, it wasn’t terrible, we won’t rush back. 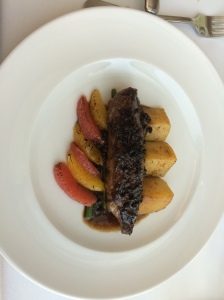 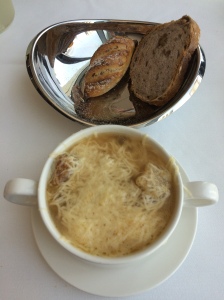 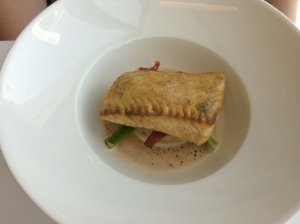