Hakkasan is one of my favourite restaurants in Doha. The food is incredible, I like the design and atmosphere of the restaurant and the service is always very attentive. We have had several outstanding meals there notably the Chinese New Year menu after which we felt inspired to book a holiday to China! However, in May a large group of us went for Friday brunch and I felt underwhelmed by the experience and after leaving some constructive feedback Paul the Deputy General Manager got in touch and invited me and a guest back for the proper Hakkasan experience. Eventually Emma and I found ourselves available at the same time so on Friday off we headed.

The temperature has dropped recently and although there was a storm in the air we chose to sit outside. The terrace is a lovely area with lanterns, a small stream and trellising which breaks up the space, the tables are spaced well enough apart it doesn’t feel cramped. We started by ordering cocktails ( the choice is vast and the staff are always willing to advise based on your preferences) then Paul came over and we had a chat about the menu, the Golden Week promotion which was on and how brunch has changed slightly to overcome initial issues similar to the ones we faced several months ago.

Emma and I both ordered the Hakka dim sum and we were advised to try the ‘Golden Week’ dim sum – it was superb, especially the scallop and lobster. We were told that on a Friday morning 800 dim sum are made by hand which is no mean fate when you consider the delicacy and consistency of each one. The dim sum were quite filling so for our main course we ordered off the ‘ small bites’ section of the menu choosing prawn toast and salt and pepper squid. The prawn toast was very good, really crispy and packed with prawn. The salt and pepper squid was also good, not too spicy with a thick crisp batter. As both of these dishes were fried it was more than enough to share or I think it may have become a bit too heavy. Golden Week macrons were brought to us as dessert, they were so beautiful it seemed a shame to eat them but we managed, they were incredibly light and sweet and melted in your mouth. 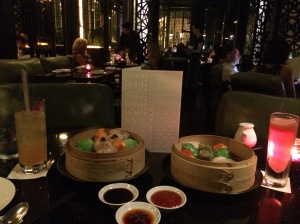 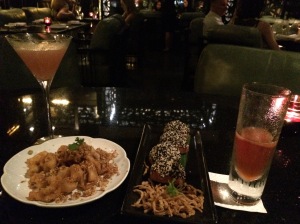 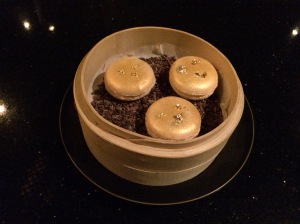 It was a lovely evening, the food and service was superb throughout. As Emma and I were guests we paid only for a selection of what we ordered and some was complimentary. My faith in Hakkasan has been restored and I would be happy to return for a brunch knowing the issues we had in May have been addressed. If you do go during the cooler months I would recommend a table outside as it really is pretty.