Since lockdown started the internet has been flooded with recommendations for films, TV shows, music and podcasts to help you while away the hours. In attempt to join the masses here are mine…….

The Invisible Man -this film was slated by some people so we were put off watching it at first. However, we actually really enjoyed it. A women leaves her abusive partner and he then takes his own life. As she builds her future she starts to experience strange occurrences leading her to believe he may not actually be dead……

1917 – a spectacular film about two soldiers sent on a mission to deliver a message which will stop men walking into a massacre. Beautifully shot and extremely brutal in places it illustrates the horrors of trench life in the Great War.

Contagion – Greg chose to watch this on my birthday! It was spookily accurate considering the current situation, a bit too close to home at times showing how easy it is for a pandemic to take hold.

Sorry We Missed You – if you liked ‘I, Daniel Blake’ this film (also by Ken Loach)  is very powerful. It tells the story of a hard working family trying to make ends meet and illustrates the stress this puts on them all. Tough going at times but chillingly realistic.

JoJo Rabbit – I absolutely loved this comedy but I know not everyone did! A young boy growing up in Nazi Germany discovers a Jewish girl being hidden in his home. As a devoted follower of Hitler JoJo is torn – should he tell the party or try to help her putting himself and his family at risk? 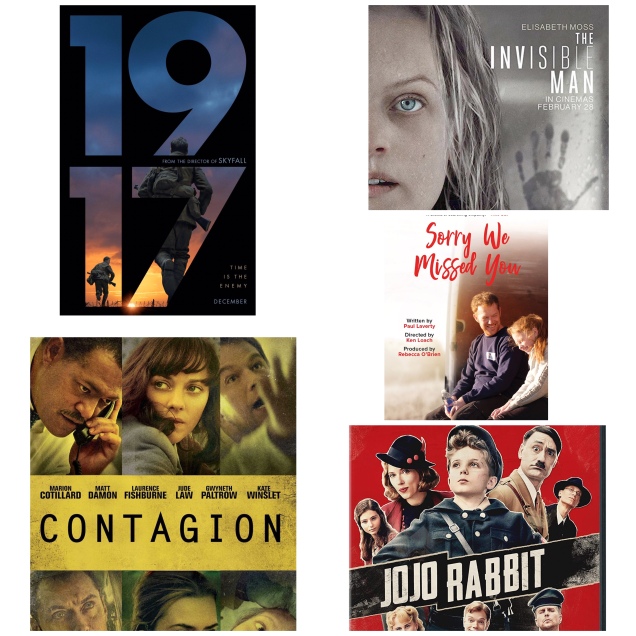 This Is Us – I have lost whole weekends binge watching this and I have zero regrets. Following the life of Jack and Rebecca as they adopt 3 babies it flicks backwards and forwards through their lives. It isn’t overly sentimental which I love, it is funny and heartbreaking and totally addictive, I really can’t recommend it enough.

The Great – absolutely not suitable for kids this TV show is very loosely based on Catherine the Great. It is filthy, hilarious and disturbing. Put it this way; I will never cut the top off a lemon and not think of her.

Gangs of London -incredibly violent ( the opening scene shows someone hanging off a building and being set on fire) this 10 parter tells the story of the struggle for power amongst different gangs in London and will make your life feel terribly mundane.

Upload – I rarely like anything even vaguely sci – fi but this was pretty good.  Based on the idea that when you die you can be ‘uploaded’ to another dimension and still stay in touch with those left on earth. Funny, quirky but with some pretty big questions about technology and mortality it is a bit like Black Mirror.

Afterlife II – Ricky can do no wrong in this series. A follow on from series one Tony continues to come to terms with life after the death of his wife. One minute you will think he is an absolute dick but then you’ll cry your eyes out when you realise how much he is still hurting.

Little Fires Everywhere  – I haven’t read the book so I can’t do a comparison but I enjoyed the TV show. Following the lives of two women and their families it deals with issues such as racism, adoption, women’s rights, identity and how people struggle to fit into society.

Unorthodox – a four parter following a young Jewish women from an ultra orthodox community in the US who flees her arranged marriage to start a new life in Berlin. It has Berlin in it, of course I am going to love it!

The Clash – London Calling – A band I haven’t really listened to before so it has been great getting into this album. My favourite song is ‘Rudie Can’t Fail’

Rumours – Fleetwood Mac – A classic album that I am revisiting. ‘Go Your Own Way’ is such a great tune.

Why Me, Why Now – Liam Gallagher – A great second solo album by Liam featuring my favourite song ‘Once’.

Tears Roll Down – Tears for Fears – Some 80’s pop nostalgia including ‘Head Over Heels’ from the awesome Donnie Darko.

Making The Cut – Davina McCall and Michael Douglas (not that one) chatting about everything and anything. I love listening to them both reviewing such a huge variety of things and getting very distracted along the way!

Chasing Cosby – I never really knew much about this case but the evidence put forward in the trail against Bill Crosby, and discussed on this show, is utterly shocking.

True Spies – I have just started listening to this and I am enjoying it so far. Using interviews from real life agents and their cases it makes me think how bizarre peoples lives are.

Casefile – still my absolute number 1 podcast. Well researched and presented they cover a huge range of crimes across different time periods and countries. If you like true crime you’ll love this.

If you’ve watched / listened to some of these recommendations I’d love to know what you thought. Plus, anything you think I’d enjoy please send me a message!

Keep safe, look after yourselves and each other 😊

A throw back to last year when we visited the Imperial City in Hue. This historic site is vast, we only managed to see a fraction of it 🇻🇳
Holiday time ☀️
Sushi in Shuiwei